Welcome to our official guide to Exeter Racecourse. In this section we explore this jump racing racecourse in detail, looking at its history, a course guide, hotel picks, fixtures, travel information, betting guides and even the weather! 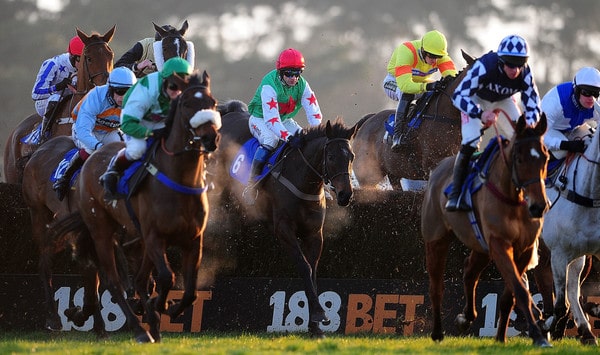 Perhaps one of the most scenic horseracing courses in the UK due to its location in the Haldon Hills, Exeter Racecourse has been part of the city’s culture for centuries and is a popular venue for all types of events.

Owned and managed by the Jockey Club, Exeter Racecourse is the highest in the UK, standing at 850ft above sea level in the picturesque Haldon Hills. The course was originally a two-mile oval-shaped track, but an additional flat track was added in the 1850s to take its length to three miles. A steeplechase route matches the original course layout, with eleven fences; two of which are open ditches and one a water jump.

Today, Exeter hosts 17 jump racing fixtures annually and a variety of private conferencing and business events. The location of Exeter Racecourse makes it extremely popular with tourists and so when not in use for horseracing, is used by the Caravan and Motorhome Club as a major caravan and camping site!

Known as one of the most progressive racecourses in the British scene due to its business development and diversification, Exeter is as good at hosting seasoned racegoers as it is families visiting the races for the first time, and has a friendly and ‘local’ reputation. Those living nearby flock to the racecourse for its annual charity events as well as its hospitality and dining options (several offered year-round, even not on racedays), live music nights and various private functions.

Exeter isn’t the biggest or most popular racecourse in the world, but it’s certainly one of the most welcoming!

Exeter Racecourse was one of several horseracing venues opened in the mid-17th Century by Charles II, who loved and wanted to encourage the development of the sport. In the early 19th Century, the course hit all-time popularity as National Hunt racing became a mainstream spectator sport, but world wars and other such external forces unfortunately quickly waned the public’s appetite for it.

Interestingly, the last duel in Devon happened at the racecourse – albeit not on a race day! Sir John Jeffcot, a judge, and Peter Hennis, a doctor, engaged in a duel because of an accusation of Hennis ‘spreading gossip’. Hennis was fatally wounded in the duel and died a few days later; and it’s believed Jeffcot fled to Sierra Leone.

On a horseracing note, Exeter battled back to regain some of its lost popularity through hard times, and in 1911, a grandstand was built at the cost of £1,000. By 2006, the racecourse had three stands, one of which was opened by Princess Royal, Anne.

The Haldon Gold Cup is Exeter’s main race, and takes place annually in October or November, depending on how the dates fall. A limited handicap, the race is a Grade 2 National Hunt steeplechase open to horses aged four or over, run over two miles and 1 ½ furlongs, with twelve fences to jump along the way.

The Haldon Gold Cup was interrupted in 2005 as the horse Best Mate very suddenly died after being pulled up by his jockey, Paul Carberry. The news went national and it remains an urban legend that Best Mate is buried under the course – he isn’t, as government regulations at the time wouldn’t allow it.

How To Get To Exeter Racecourse

Exeter Racecourse is easily accessible by road off the A38, just five miles from the M5 southbound – however, traffic does get fairly congested on racedays, so it’s always advised to leave plenty of travel time and plan to arrive early. Parking is free at all events and fixtures.

On race days, free buses run to and from the course from Exeter St. Davids Rail Station and Exeter City Bus Station to offer connected travel. Exeter is about two hours on the train from London Paddington (dependent on service levels) and is accessible by coach from almost anywhere in the UK. The nearest airport is Exeter International, situated about a 15-minute drive from the course. There is space for helicopters to land at the course itself, but only on racedays, and only when arranged in advance.

There are plenty of hotel options situated throughout the city of Exeter, as well as several slightly closer to the racecourse. The Exeter Court Hotel and The Willows are the closest; both mid-range informal hotels with breakfast options. The nearby Nobody Inn is a charming 17th Century hotel and Lower Thornton Farm is a family-run local B&B. All of the usual hotel chains you’d expect can be found in the city centre, with varying room packages available.

Also, check out the fantastic range of brilliant hotels available via Booking.com below:

Betting on-site at Exeter Racecourse can take place either with independent trackside bookmakers, at a betting kiosk or through the Tote. Online options with ‘preferred betting partners’ are also available through the Jockey Club, but be warned – you may need to get onto the WiFi to be able to access them!

In Exeter city centre, you won’t find a large amount of betting shops to facilitate your flutter, but you there are branches of Betfred, William Hill, Ladbrokes and Coral. Other betting shops are available but are primarily found in residential areas of the city.

Check below to see our recommended list of the Best Exeter Racecourse Betting Sites:

Punters and race-goers love to keep up with the weather to predict going conditions, as well as making sure what they wear is suitable. Here’s the current weather forecast for Exeter

The Devon National (name to be determined by sponsor) is a very popular race locally and with burgeoning horseracing trainers. A 21-fence race spanning three miles six furlongs, the prize fund often reaches over £15,000 and is well-attended.

Exeter Racecourse sporadically hosts live music through spring and summer evenings, often part of events fundraising for charity. It also hosts weekly car boot sales on the course on Sundays and Bank Holiday Mondays; where these dates do not clash with race days. 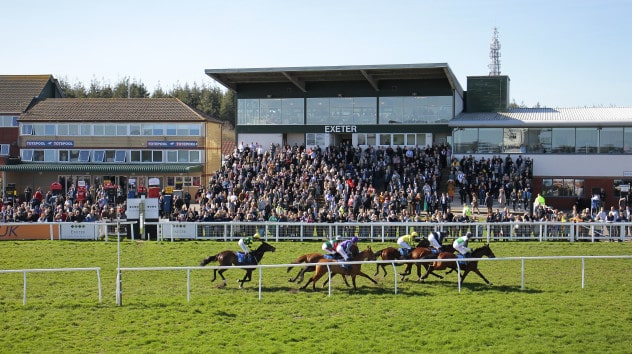 Our team as of May 2020 have reviewed these racecourses that you can also bet on: